his evening meal, heart fluttering like a wounded sparrow

as the beat of his feet ground his presence to her consciousness.

Contrary to Pavlov’s dog, the lazy metronome of his breathing, in

then out, spawned a psychic desert. Her well-worn footwork

and gestures remained instinctive as he sang once again

his favourite song. She followed his lead, the subtle signs giving

encouragement of her subservience which she plated

and served to him with a side order of prayer. His appetite increased

he craved more. With mismatched souls at counterpoint

stilled her perfect timing. This small kitchen setting, was

stage made for a ubiquitous, repeat performance of

I hold my position and scan the horizon,

No movement of forces, no sighting of ranks,

Opponents and rivals move inwards towards me,

Pressing in at my sides and sniping my flanks.

Espying my target renews my persistence,

My faltering stamina is enriched and sustained.

The hordes of the future surge forward as one,

Running at arms and grasping at coat tails,

I reach out and grab my war-weary son.

He hugs me so tightly I fear I’ll stop breathing,

Pulling quickly away so he won’t appear fool,

My heart beats with love and his eyes shine with childhood,

I take hold his hand and we head home from school.

stand their vigil with blind

on the heavy air

as ghosts brake their cover

to the life seekers

offering them the sky

one small voice sings in praise

as stars shine brightly above

Wild and flighty scraps of paper

Bounce and scamper in search of their owners

It screams silently to a dark, world worn pigeon at my feet

I squeeze together my thin toothpaste bones

As they dissipate into the north wind

I feel a familiar foreboding in this dark city dawn

The wreckage of society

Stares with frozen eyes from a darkened door

Bowing I give empty blessing

As I hear my own unrecognised voice

Giving factual reports of another through the cracks body

Beside lost humanity to be cleared before mornings rush

My split end hair trips the light fantastic as

it freefalls down and around your nowhere

histories so similar as to add whimsy

to the turmoil of lust, build walls of solitude

The train is at the station where choices

matter but my shoes are heeled and

the movie reel is far from finished. This

ISIS hatred beats me to an ignorance, such

that, the shrinking violet can never bloom 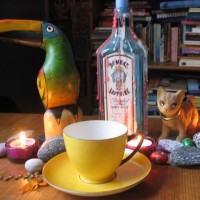 Stoner on a rollercoaster
Eye Will Not Cry

The Art and Craft of Blogging

Thoughts on Book Writing and Other Humorous Endeavors